Carlyle is the frontrunner to acquire Mphasis from Blackstone

Carlyle Group is negotiating with at least half a dozen banks and a pension fund to buy out Blackstone’s stake in Mphasis. Binding offers due today.

Mumbai: Private equity firm Carlyle Group has emerged as a probable frontrunner to acquire Mphasis Ltd. from Blackstone Group, in what could be the largest buyout in the Indian IT space, according to people familiar with the development.

Carlyle is negotiating with a clutch of overseas banks and a pension fund—Deutsche Bank, Barclays, Standard Chartered Bank, Nomura, and Canada Pension Plan Investment Board—to finance the acquisition. While a unit of the Canadian pension fund is likely to offer mezzanine debt, others are likely to come on board as senior lenders.
JP Morgan, which is advising the fund, might join the consortium.

ET had on Jan. 4 reported that Brookfield, Bain & Co, Carlyle and Permira were queueing up for a likely $3 billion Mphasis buyout. They are still in the race, but a decision is yet to be taken, one person aware of the matter said.

It is possible that two of the contenders might team up to make a bid, and some of the limited partners of these funds—Abu Dhabi Investment Authority (ADIA) or GIC of Singapore—may step in as well, said sources close to Blackstone. Permira has opted out. Goldman Sachs PE, according to another source, has also shown last-minute interest to be part of a consortium and is said to have offered a minimum of $500 million funding commitment.

But at least seven people ET spoke with said that the spurt in Mphasis’ share price and the size of the transaction has muted the enthusiasm of the others.

“Blackstone does not want Carlyle to be the sole bidder and wants to keep the competition alive to maximise value. But Carlyle seems to have done most work for now,” said an executive familiar with the development.

The due date for submitting binding offers is Tuesday.

One of the persons mentioned earlier in this story said Blackstone had planned block trades to capitalise on the bull run, much like it did at Essel Propack, but the size of the Mphasis deal dissuaded the company from such a move.

A majority stake sale by Blackstone and a change of control at Mphasis will trigger an open offer for an additional 26% stake, according to India’s market regulations.

Carlyle, meanwhile, has been among the busiest private equity investors in India. It has so far deployed more than $3 billion—a fourth of it last year—for buying into or buying out companies across pharma, financial services, healthcare and technology sectors. It has roped in former Mindtree CEO Rostow Ravanan as an operating adviser to help in technology transactions.

Mphasis has two streams of business:

Ever since the Blackstone takeover in 2016, Mphasis’ key capabilities in the BFSI space have been renewed, resulting in bigger and longer duration deals for the company in the segment. Banking and capital markets contribute to over half of the company’s total revenue.

Mphasis has also been chasing and winning more ‘digital’ deals that are centred around its cloud and AI capabilities in the recent quarters. This has helped it reduce its dependence on indirect business.

The company has also been trying to offset the slower pace of revenue growth from DXC by winning new, transformation deals with elements of cloud, AI and ML from the market, said analysts. CEO Nitin Rakesh is confident of the company’s ability to reduce dependence on DXC.

“We are at a point where our direct relationships are starting to be as large in terms of revenue contribution. I think 10-12% is a good range to think about for DXC in the medium to longer term perspective,” he told ET.

The company signed new deals worth $247 million in the October-December quarter of the ongoing fiscal. It also acquired UK-Datalytyx in November to supplement its cloud-based services portfolio.

“We expect continued traction in the direct business (excluding digital risk), helped by strong deal wins and a favourable demand environment,” said Mukul Garg of Motilal Oswal Financial Services. This should more than compensate for continued drag in its under pressure DXC business.” 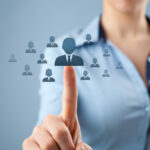 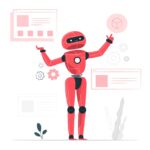