AI will drive next wave of Digital Transformation: A perspective

In the past months, most of you may have run into a situation where you open the GPS app on your smartphone and it ‘knows’ where you would like to go because it fits a certain repetitive pattern of behaviour or the photo app organizing your pictures based on who are the most important people in your life. Underlying all these Artificial Intelligent (AI) features is a technology called deep learning that will unleash the next wave of digital transformation in the coming years ranging from self-driving cars to breakthrough medical diagnostics. But before we get to AI, we need to understand the core of digital transformation itself.

Because digital transformation will look different for every company, it can be hard to pinpoint a definition that applies to all. However, in general terms:

we define digital transformation as the integration of digital technology into all areas of a business resulting in fundamental changes to how businesses operate and how they deliver value to customers.

Though, in specific terms digital transformation can take a very interesting shape according to the business moment in question. From a customer’s point of view, “Digital transformation closes the gap between what digital customers already expect and what analog businesses actually deliver.”

I believe that digital transformation is first and foremost a business transformation. Digital mindset is not only about technology, but about curiosity, creativity, problem-solving, empathy, flexibility, decision-making and judgment, among others. Companies needs to foster this digital mindset, both within its own boundaries and across the company units.

The World Economic Forum lists the top 10 skills needed for the fourth industrial revolution. None of them is totally technical. They are, rather, a combination of important soft skills relevant for the digital revolution.

You don’t need to be a technical expert to understand how technology will impact your work. You need to know the basics, remain open-minded and work with people who do know a lot about technology. Remaining open-minded to “what and how” AI can be helpful, knowing the benefits of AI and integrating people who understand the technical background

Digital Transformation, beyond the integration of digital technologies, is more about cultural change that requires organizations to continually challenge the status quo, experiment often, and get comfortable with failure. The Most likely reason for business to undergo digital transformation is the survival issue. Businesses mostly don’t transform by choice because it is expensive and risky. Businesses go through transformation when they have failed to evolve. Hence its implementation calls for tough decisions like walking away from long-standing business processes that companies were built upon in favour of relatively new practices that are still being defined.

Disruption in digital business implies a more positive and evolving atmosphere, instead of the usual negative undertones that are attached to the word.

According to the MIT Center for Digital Business, “Companies that have embraced digital transformation are 26 percent more profitable than their average industry competitors and enjoy a 12 percent higher market valuation.”

A lot of startups and enterprises are adopting an evolutionary approach in transforming their business models itself, as part of the digital transformation.

According to IDC, One-third of the top 20 firms in industry segments will be disrupted by new competitors within five years

The various Business Models being adopted in Digital Transformation era are:

Since Digital Transformation and its manifestation into various business models are being fast adopted by startups, there are providing tough competition to incumbent corporate houses and large enterprises. Though enterprises are also looking forward to digitally transform their enterprise business, the scale and complexity makes it difficult and resource consuming activity. It has imperatively invoked the enterprises to bring certain strategy to counter the cannibalizing effect in the following ways:

The curious history of AI

So here’s an interesting question, AI has been around for more than 60 years, then why is it that it is only gaining traction with the advent of digital? The first practical application of such “machine intelligence” was introduced by Alan Turing, British mathematician and WWII code-breaker, in 1950. He even created the Turing test, which is still used today, as a benchmark to determine a machine’s ability to “think” like a human.

The biggest differences between AI then and now are Hardware limitations, access to data, and rise of machine learning.

Hardware limitations led to the non-sustenance of AI adoption till late 1990s. There were many instances where the scope and opportunity of AI led transformation was identified and appreciated by implementation saw more difficult circumstances. The field of AI research was founded at a workshop held on the campus of Dartmouth College during the summer of 1956. But Eventually it became obvious that they had grossly underestimated the difficulty of the project due to computer hardware limitations. The U.S. and British Governments stopped funding undirected research into artificial intelligence, leading to years known as an “AI winter”.

In another example, again in 1980, a visionary initiative by the Japanese Government inspired governments and industry to provide AI with billions of dollars, but by the late 80s the investors became disillusioned by the absence of the needed computer power (hardware) and withdrew funding again.

Investment and interest in AI boomed in the first decades of the 21st century, when machine learning was successfully applied to many problems in academia and industry due to the presence of powerful computer hardware. Teaming this with the rise in digital, leading to an explosion of data and adoption of data generation in every aspect of business, made it highly convenient for AI to not only be adopted but to evolve to more accurate execution.

According to IDC, by 2019, 40 percent of all digital transformation initiatives will be supported by cognitive/AI capabilities.   Due to radical computational power, near-endless amounts of data, and unprecedented advances in deep neural networks, AI will emerge as the most disruptive class of technologies, and its manifestation into various trends that we see and will continue to see, shall drive the digital transformation as we understand it. The following are the trends:

AI’s growing Influence due to favourable factors: This time, the scale and scope of the surge in attention to AI is much larger than before. For starters, the infrastructure speed, availability, and sheer scale has enabled bolder algorithms to tackle more ambitious problems. Not only is the hardware faster, sometimes augmented by specialized arrays of processors (e.g., GPUs), it is also available in the shape of cloud services.

Societal Impacts & New Thinking: Interest in AI is reaching institutions outside of the industry. Lawyers will start to grapple with how laws should deal with autonomous vehicles; economists will study AI-driven technological unemployment; sociologists will study the impact of AI-human relationships. This is the world of the future

Artificial intelligence technology will further be democratized: As per the results of a recent Forrester study , it was revealed that 58 percent of professionals are researching artificial intelligence technology, while only 12 percent are actually using an AI system. Since AI requires specialized skills or infrastructure to implement, Companies like Facebook have realized this and are already doing all they can to simplify the implementation of AI and make it more accessible. Cloud platforms like Google APIs and Microsoft Azure are allowing developers to create intelligent apps without having to set up or maintain any other infrastructure.

Niche AI will Grow: By all accounts, 2017 won’t be the year for large, general-purpose AI systems. Instead, there will be an explosion of specific, highly niche artificial intelligence technology systems. These include autonomous vehicles (cars and drones), robotics, bots (consumer-orientated such as Amazon Echo and personal assistants), and industry specific AI (think finance, health, security etc.).

Continued Discourse on AI ethics, security & privacy: Most AI systems are immensely complex sponges that absorb data and process it at tremendous rates. The risks related to AI ethics, security and privacy are real and need to be addressed through consideration and consensus. Sure, it’s unlikely that these problems will be solved in 2017, but as long as the conversation around these topics continues, we can expect at least some headway.

Algorithm Economy: With massive data generation using flywheels, there will be an economy created for algorithms, like a marketplace for algorithms. The engineers, data scientists, organizations, etc. will be sharing algorithms for using the data to extract required information set.

Where is AI Heading in the Digital Road?

While much of this technology is still rudimentary at the moment, we can expect sophisticated AI to one day significantly impact our everyday lives. Here are four ways AI might affect us in the future:

Humanizing AI: AI will grow beyond a “tool” to fill the role of “co-worker.” Most AI software is too hidden technologically to significantly change the daily experience for the average worker. They exist only in a backend with little interface with humans. But several AI companies combine advanced AI with automation and intelligent interfaces that drastically alter the day to day workflow for workers

Rise of Cyborgs: As augmented AI is already the mainstream thinking; the future might hold witness to perfect culmination of man-machine augmentation. AI augmented to humans, intelligently handling operations which human cannot do, using neural commands.

AI Oracle / AI God ? :  AI might become so connected with every aspect of our lives, processing though every quanta of data from every perspective that it would perfectly know how to raise the overall standard of living for the human race. People would religiously follow its instructions (like we already follow GPS navigations) leading to leading to an equation of dependence closer to devotion.

Digital business transformation is the ultimate challenge in change management. It impacts not only industry structures and strategic positioning, but it affects all levels of an organization (every task, activity, process) and even its extended supply chain. Hence to brace Digital led disruption, one has to embrace AI-led growth. Organizations that deploy AI strategically will ultimately enjoy advantages ranging from cost reductions and higher productivity to top-line benefits such as increasing revenue and profits, richer customer experiences, and working-capital optimization. 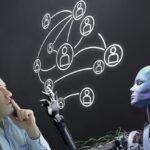 Future of HR redefined by AI
All Posts